My family and I had planned a two week vacation beginning June 20th. Seven of us including two of my grandchildren were driving down to Georgia to visit family in my Acura MDX with a luggage rack on top and camera gear crammed in my travel backpack in the back. I'm not a fan of driving long distances, but I decided it might be the last chance I get to see my grandmother, so decided I'd tough it out.

Before leaving we'd had the check-engine light come on and my local shop told me it was the transmission, but they flushed it, told me that it looked like it had never been flushed and said everything seemed to be working fine. They finished it up with "You'll know if it worked or not if it dies."

We got as far as North Carolina on Monday and the transmission overheated. I have to say I'd braced myself mentally for this occurrence and was prepared to rent a car if I had to or whatever was needed. It was still stressful. We got a couple of crappy rooms at a crappy hotel in the crappy town we were in and figured we'd decide in the morning what to do.

After praying about it I decided that I felt we should return home. I really needed the Acura to last another 3 or 4 months before replacing it and didn't want to stress the transmission with such a long trip if I could keep from it. We turned around and decided on a regimen of drive for an hour, stop for a half hour so we wouldn't overheat it.

We got as far back as Wythville Virginia the next day and while I glanced down at my GPS to verify directions hit debris in the road. This was probably the first time I'd used the word "debris" but little did I know it was soon to become my most used word. Ever.

Whatever I hit tore a 3 inch gap through the steel belt of the driver's side rear tire. Frustrating, and challenging to figure out how to fit a dead tire, seven people including two child seats and my camera gear and luggage in a seven passenger SUV. We stopped in Wythville and bought a new tire and Wal-Mart. At this point we decided it was enough for the day, got another two hotel rooms, this time in a much nicer place and stayed Tuesday night.

Wednesday we continued to limp home and made it without any more incidents. I decided I was at least going to finish taking the week off to de-stress after the trip before returning to work. We were able to sleep in our own beds Wednesday night. I had no idea it would be for the last time.

Thursday the 23rd, we had scattered thunderstorms all day. Nothing unusual. We live in the mountains so half the time the storms we're supposed to get just hit the ridge and turn away or dissipate. My wife and I decided we were going to leave our two daughters at home and go to lunch and the afternoon movie at the local theater about 1:45. About that time the heavy, drenching rains started. Within minutes the water was rushing down our street and making a right angle to flow into my porch. My porch hasn't gotten wet in over 8 years since I fixed a drainage problem around it.

By 2:05 my porch was completely flooded, with the water coming up to the threshold of the front door of the house. Keep in mind my house is not in a flood plain, and this water was not even coming from the creek - it was coming down the road.

My wife went across the road and checked on our neighbor, an elderly widow who has had a hip replacement. We decided at this point that it was best to head out for a while. I assumed that we'd be back home in an hour and I'd have to clean up my porch. Before leaving I had the forethought to disconnect my main file server and set it on top of a tall built-in cabinet, and I turned off the main electrical breaker to the house.

By 2:20 after trying to get the kids, the neighbor and her dog loaded up into my Acura the water had risen to the point it was a foot deep in the road. Still not coming up from the creek - this was all coming from the road and hill behind our home. We drove down to my office to take shelter. My daughter's family grabbed a few things like sleeping bags and pillows and met us there.

We continued to check the Internet for news and monitor the rain and roads but we and about 15 employees got stuck at work because nobody could get out of town. People were posting pictures and videos to Facebook, and by 4 or 5 PM the main bridge to my house that usually looks like this: 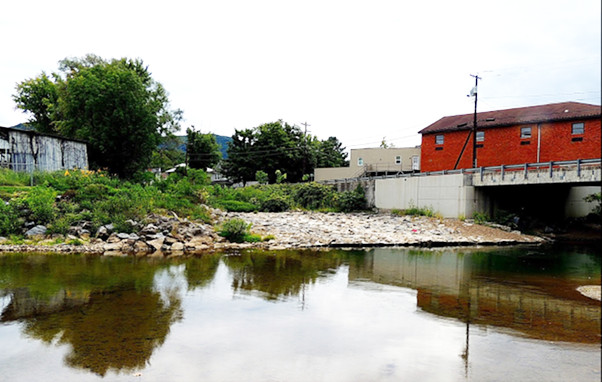 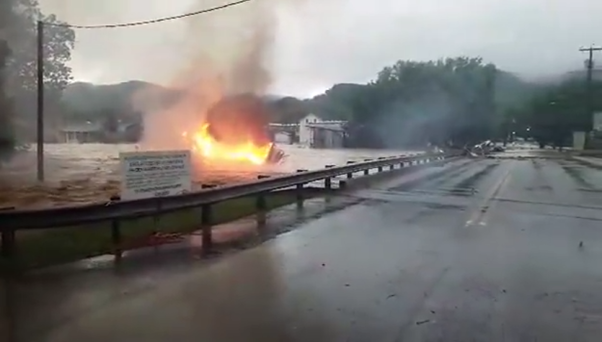 That's a house on fire, floating down the creek. The same creek and bridge that in the previous picture you can easily see the bottom of and is only a few inches deep, is now over part of the bridge.

When it was all over I made it home around 7 AM to find that the water had been so deep that I had mud and water on top of the kitchen counters. My Volvo had been parked there and now looked like this: 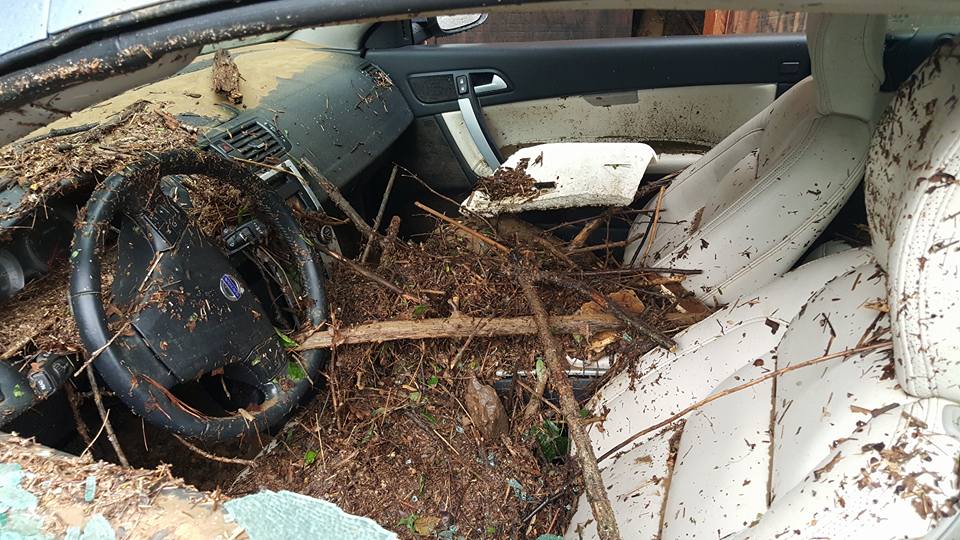 My Ford Escort wagon is now famous as news stations around the world picked up a photo of it. The water was so deep that it floated about 50 yards down the road and propped against a telephone pole. That's a chunk of road asphalt on top of it: 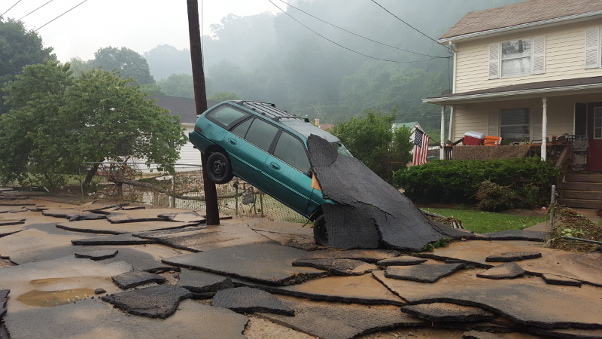 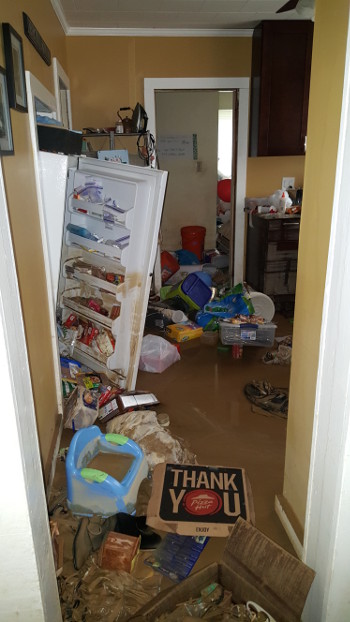 And my several thousands of dollars of camera gear I'd taken on vacation was still in it's backpack which had been submerged for hours, along with all of my backup camera gear under my bed. Everything on the bottom floor of my home was a loss. Even my dryer which was stacked on top of my washer had water in it. My water heater was three weeks old and was destroyed.

We're in the process of rebuilding our home. I've got my third water heater in as many months installed finally, but we still have several months of work just on the inside, not to mention my porch, landscaping and my shed that moved several feet. And the mud. I never expected to find 4 to 6 inches of mud inside interior walls. You couldn't see the hard drives in my desktop computer because of the mud.

We were lucky. My family and I got out, and our neighbor with us. All of my animals were safe. Several people on my street and the next street over didn't make it. Just from my bedroom window, there's four houses that I used to be able to see that are now gone.

My daughter set up a Go-Fund-Me page if you have enjoyed my blog and feel like giving back, I'm accepting all the help I can get. (This is now closed.) FEMA funds don't even come close to covering the appliances, much less drywall, flooring, furniture, contents or the hundreds of hours of labor that go into completely rebuilding from the water damage. My Volvo had full coverage and was covered, but the Escort didn't. My homeowners of course doesn't cover flood and since we weren't in a flood plain, we had no flood insurance.

If you want to see a list of things I learned after the flood, I've got a Facebook post that seemed to have gone a little bit viral, at least locally. And you can watch my Facebook posts to see how our recovery efforts are progressing.