I recently switched from the Jawbone Up to the Garmin Vivosmart fitness tracking band. Here's my review.

Everyone should please be aware that apparently Garmin has a horrible customer service reputation. I've personally been at the receiving end of that to some degree and watched other users have troubles as well. Googling for garmin customer service will give you an idea of how bad it can be. I think they're very disconnected - while there are some people who have a clue and want to help there are others at Garmin who really, really don't.

Also be aware the following issues have been reported with the bands, although I've had only one or two minor issues with mine:

This is Garmin's second entry into the wearable fitness tracker band (as opposed to the watches they've offered for a while) and it's obvious that Garmin was listening to what consumers were saying about other products.

My primary reason of switching from the Jawbone Up24 band was that I had yet another band die. I can't seem to keep an Up band working for more than 6 months and my new Up24 went into an endless reboot loop after only 5 months. While looking around I noticed that Garmin had just announced their new Vivosmart and the feature lists of what I wanted was spot-on.

I was pleasantly surprised to find the Garmin Vivosmart and that it offered all of the above plus the following: 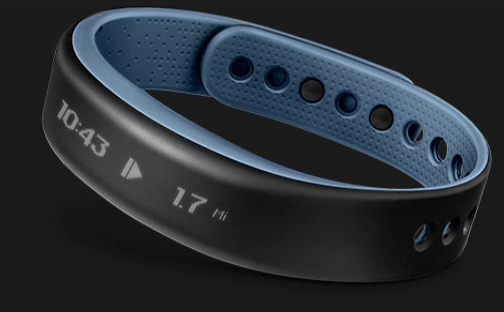 In addition to regular activity tracking you can get from the likes of Jawbone, Nike or Fitbit, the Vivosmart has a built in display that will optionally print out your text message and other smartphone alerts. It also has a find-my-phone feature that you can trigger from the band making your phone ring and will warn you if you get too far away from your phone. I found that about 25 feet indoors through walls would cause my band to vibrate and let me know the bluetooth connection was lost.

After 24 hours of wearing the band and constantly playing with it's OLED display, I find that my battery meter is still at full and my phone doesn't show any additional battery drain to keep the bluetooth smart connection active.

While it's an awesome band, there's a few downsides to it that may later be fixed in software:

Overall I'd call this one of the - if not the - best fitness bands available. It doubles as a smartwatch for the features you'd really use (Come on Apple, do you really think we want to stare at a watch sized screen to read maps?) The screen is really pretty amazing, even if very low res. When off, you wouldn't even know there was a screen.

I think the current generation of 20-somethings products like this are targeted for really don't want to wear a full watch. This looks more like a sport bracelet than old-school watch fitting right in with that demographic. I believe it hits the sweet spot. It doesn't try to be too ambitious with extra smartwatch features and distills it down instead to just the features I think most people would use on a daily basis. The band is actually pretty stylish when you think of the active, outdoors lifestyle and comes with an extra safety clip you can optionally use to ensure the band doesn't come open even during the most strenuous activities.